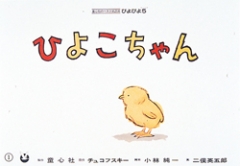 A work by Russian author Kornei Chukovskii is rendered in verse-like text by poet Jun’ichi Kobayashi. In order to produce kyokan through communication, which is uniquely possible in kamishibai, the text repeats language such as hora (look here!), konna fu ni (like this), ne (you see?), to striking effect. Eigoro Futamata’s simple and lovely illustrations combine with the beautiful text in this long-selling kamishibai. 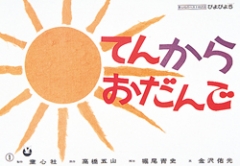 This kamishibai is based on a 1948 work by Gozan Takahashi, known as a founder of kindergarten kamishibai. Yuko Kanazawa has faithfully brought the story to life again. Two story options are printed on the back of the sheets; the “spring version” is Gozan’s original. This story wraps listeners in a mysterious happiness, as though the life of the long-lived old woman has been handed to them. The “autumn version” of the work is Seishi Horio’s later adaptation and has a realistic, instructive aspect. 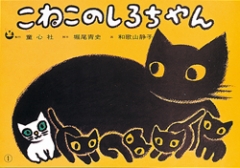 His mother and his siblings are all black, but little kitten Shiro-chan is white. His feelings as he longs to turn black touch the heart of the audience, thanks to Seishi Horio’s text plus Shizuko Wakayama’s illustrations, which possess a unique charm. The kamishibai gives children a feeling of delight and happiness in being themselves, just the way they are. 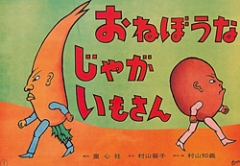 This 1937 work of children’s writer Kazuko Murayama was published as a kamishibai in 1971 by her husband, Tomoyoshi Murayama. Tomoyoshi Murayama was active in Japan’s modern theater movement and as a playwright, stage director, illustrator, and author. Here, the unique and enjoyable expressions of vegetables convey the importance of being an individual while also recognizing the different strengths of others and journeying with them?essential aspects of life. 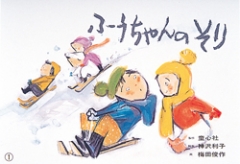 The fantasy world of well-known Japanese children’s author Toshiko Kanazawa meets the beautiful illustrations of Shunsaku Umeda in this charming capitalization on the kamishibai format. Fu-chan takes off on a sleighing adventure and is protected by a mother bear, emblematic of reverence toward nature. Fu-chan then returns home safely. A child’s will to action and eagerness for growth invite the sense of kyokan. 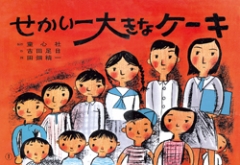 The Biggest Cake in the World

Writer Taruhi Furuta and artist Seiichi Tabata worked diligently to turn a portion of Robotto Kamii, a Japanese children’s book, into this kamishibai. It is the first in a series of four. The text addresses the audience from the first scene, extending the world of the story into the real world. Careful simplification of the overall structure also makes kyokan with Kamii easy to create. 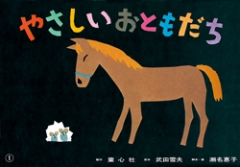 Keiko Sena has long explored the possibilities of harie (pasted paper) in her work as a picture book and kamishibai artist. The simplicity of her illustrations lends itself perfectly to this work. Thanks also to the vivid colors, both the friendship between a horse and some mice and the feeling of urgency when a fire breaks out spread quickly to audience members. The simple beauty of the kamishibai wraps children and adults alike in a feeling of warmth. 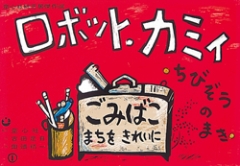 Children’s dreams of eating lots and lots of cake become connected with something much bigger in this kamishibai, which overflows with life. The children’s longing for cake becomes the wish to build a future in which everyone in town is happy; the development of this connection invites a rich sense of kyokan. The kamishibai makes the most of a fresh creativity and laudable perspective on children that could only have come from Taruhi Furuta and Seiichi Tabata. 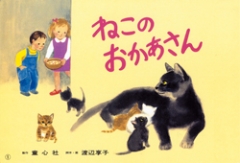 Love and peace are the themes of many kamishibai by Kyoko Watanabe. This one, in which a mother cat rescues five kittens from a fire, is based on a true story. The amazing cat, in illustrations that capitalize on kamishibai’s simplicity, conveys the force of powerful love to the audience. The use of color is also excellent and effective. 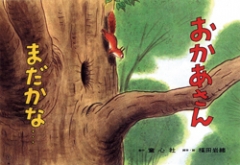 Is Mother Back Yet?

This is a kamishibai by Iwao Fukuda, whose work regularly and carefully depicts the feelings of children as they go through everyday life. The progression of true-to-life illustrations, which uses the sliding in and out of sheets to advantage, helps the audience share a child’s feeling of unrest as he waits for his mother to come home. Kindly animals appear one after another; the final scene depicts the joy of having Mother return. This kamishibai imparts the secure feeling that, yes, things will turn out all right.