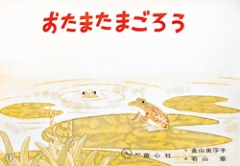 This visually beautiful kamishibai imparts the wish to grow by bringing viewers into sympathy with the tadpole Tamagoro. Ken Wakayama’s illustrations of nature touch the heart, opening a comfortable space of kyokan to the audience. In the midst of the quiet emotions that result, this kamishibai encourages children to look forward to their own growth. 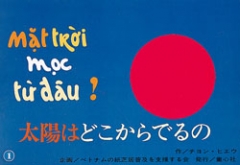 From Where Does the Sun Appear?

This is a kamishibai from Vietnam in which animals search for where the sun comes from. Author Truong Van Hie fought in the Vietnam War, seeking independence and freedom for his country. His life is condensed in this kamishibai, which depicts the search for truth with bold illustrations. This was the first kamishibai by a non-Japanese author to earn Honorable Mention in the Gozan Prize competition. 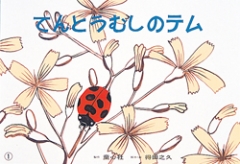 Yukihisa Tokuda is a researcher as well as an illustrator, and his fondness for insects spills into the art and text of this kamishibai. This work not only fosters enjoyment in learning about insects, but also invites children to share, via kyokan, the joy of being alive as they follow Temu on his journey. The vivid illustrations of insects and visual progression that capitalizes on the sliding out of sheets evokes a world that could only come to life through kamishibai. 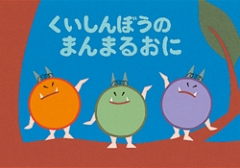 The Hungry Round Ogres

This kamishibai teaches the mathematical concept of one-to-one correspondence while also teaching the “life” concept of each person being able to find happiness. The shape of the “hungry round ogres” attracts children, making these characters a hit. The joy of kyokan helps the world of numbers to capture children’s imaginations. 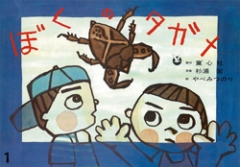 This was the first title published (in 1981) by an author who has worked on kamishibai for many years: Mitsunori Yabe. A giant water bug, one of the largest insects that lives in fresh water, opens a lively world to children. Originally conceived by Hiroshi Sugiura, this work steals audience members’ hearts thanks to Mitsunori Yabe’s passion for kamishibai and pursuit of different varieties of kamishibai expression. 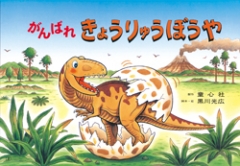 This kamishibai exemplifies the work of Mitsuhiro Kurokawa, who has focused on extinct animals such as the dinosaurs. As a little boy dinosaur searching for his mother meets members of different dinosaur species, an entertaining, quintessentially kamishibai drama unfolds. At the same time, Mitsuhiro Kurokawa’s scientific perspective as a researcher of paleontology interests children in learning more.